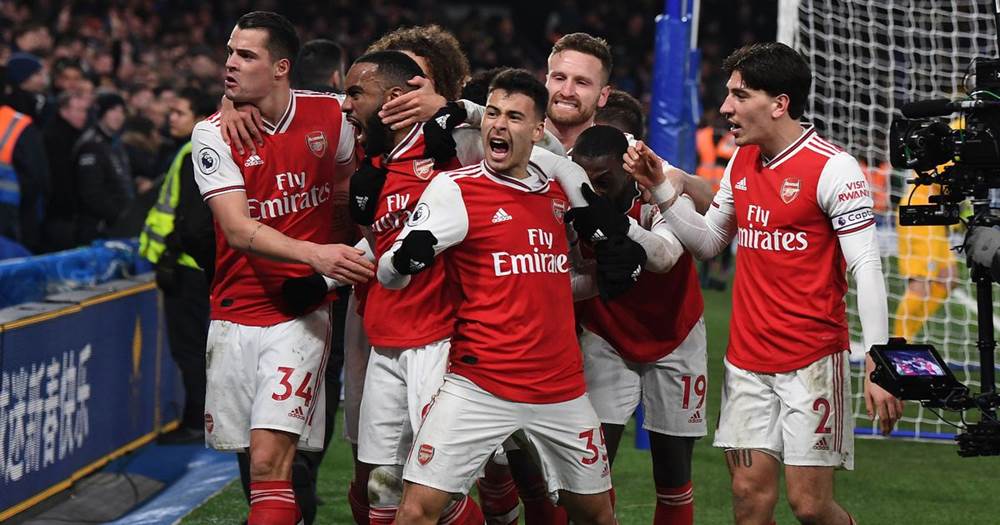 An ode to the team's spirit, encapsulated in a single strike.

There’s hardly a worse feeling in football than seeing your player foul an opposition’s attacker inside the penalty area - and watch the referee go for the red card, as if in slow motion.

Despair creeps in. That sensation of ‘here we go again'. Ask any football fan. He may not even remember the last time his team was penalised in such a harsh fashion, but he will recall the feeling.

If that happens in the first half, the sinking sensation is inescapable. You can almost taste how your team tries and ultimately fails, to hold onto a respectable score, especially in a big game.

So when David Luiz bundled over Tammy Abraham inside the penalty box, many wrote the game off as a lost cause. Given how meek and tame the Gunners looked under Unai Emery, there was almost an acceptance Arsenal would be found wanting against Lampard’s Chelsea with 10 men.

Mikel Arteta may be Spanish too but he is as different from his predecessor as it gets. He waved Rob Holding away in order to keep Gabriel Martinelli on the pitch. But it was about more than that, actually.

The lego-haired Spaniard sent his team, its fans and the entire Chelsea Football Club a message: this Arsenal would not be bullied into submission. Not even with 10 men. Not even without its leading goalscorer. Not even with a pairing of Shkodran Mustafi and Granit Xhaka at centre-back.

And the team responded. They showed they are up for the fight, however much adversity they are up against. Mustafi knuckled down and worked. Xhaka led the team, invisible armband on his shirt sleeve. Bernd Leno was letting nothing past him. The fans peeked at their screens from behind the sofa, with feeble hope.

Yet on 62 minutes, the Gunners were still 1-0 down, Chelsea barraging their penalty area with corners. Willian curled another one in, Mustafi headed the ball out of the danger zone - for another Blues’ onslaught it seemed.

Step up, Gabriel Martinelli. The teenage sensation no one knew anything about ahead of the season (barring his compatriot Edu). An 18-year-old lad asked to fill the goalscoring boots of Pierre-Emerick Aubameyang.

He knocked down Mustafi’s headed clearance and was on his bike, Chelsea defenders making lung-busting runs, desperately trying to get back. Kante looked to have stopped the Brazilian who made a heavy touch - and then Ngolo slipped.

Gabi was through on goal, sprinting 67 yards in 13 seconds. 13 unlucky seconds for Kepa Arrizabalaga, an €80-million Manuel Almunia, who looked smaller and smaller as Martinelli loomed over him.

One touch later it was all over. The ball rippled the net, Martinelli crossed his arms in a ‘no big deal’ kind of way and Lacazette replicated the Brazilian’s celebration.

But it was a pretty big deal. A seemingly simple one-on-one encapsulated the long way Arsenal have come in a short space of time under Mikel Arteta, which the fans saw that night, summed up in three words.

Arsenal
Cazorla: 'Arteta can become a great coach at Arsenal'
35 4
27 days ago

Arsenal
Arteta: 'I'm so proud that the fans are feeling a little bit closer to the team now'
41 9
25 days ago

Arsenal
'Wouldn't leave Laca on the bench', 'Drop Ozil instead': Arsenal fans discuss how to fit Gabi & Auba in
20 38
17 days ago

Arsenal
David Luiz: 'It doesn't matter that this is Arteta's first job as a coach'
20 4
13 days ago

An £80m Almunia? I think he deserves some respect and must be addresses right 👉!! He did his best for the TM

What surprise me is that the boy is a small boy and he is doing great things in the team unlike players we signed with big funds and yet they haven't provide us anything this season, the boy should be kept

Abdul Halim13 days ago
Reply to a comment by bolly_kay

Gabriel Martinelli might be a small boy but his Heart is bigger than anyone else in the Team. Up The Gunners!

Better tie Gabigoi down to a good contract and an insane buy out clause before the sharks at Madrid come sniffing. He's worth his weight in gold

spikey spike27 days ago
Reply to a comment by Charles Derby