Tribuna
/
Arsenal
/
News
/
'Can have 115 Sakas for Ozil's wages', 'What do you expect an academy player to earn?': Arsenal fans react to Bukayo's potential new deal 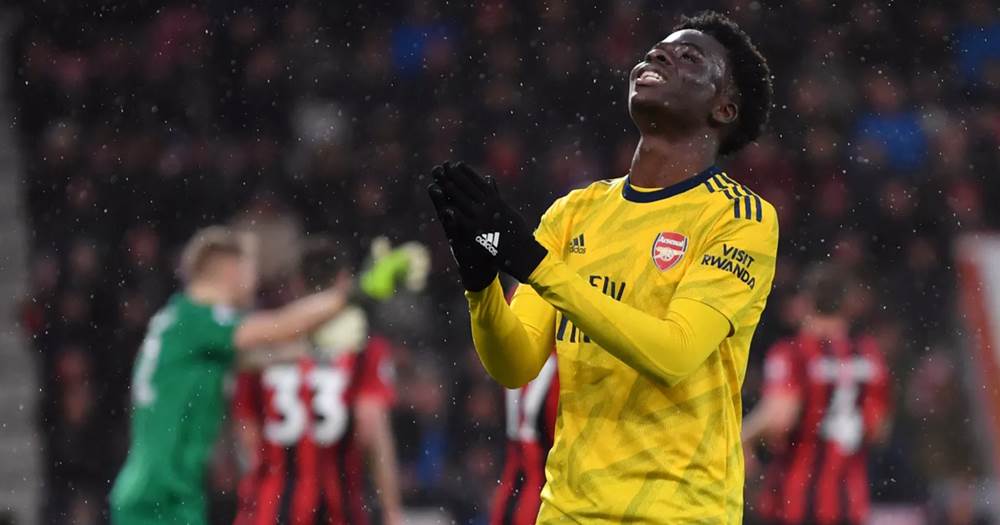 'Can have 115 Sakas for Ozil's wages', 'What do you expect an academy player to earn?': Arsenal fans react to Bukayo's potential new deal

It looks like Arsenal are renegotiating Bukayo Saka’s contract to reward the youngster for his efforts and our readers discuss the winger’s current £3k-per-week wages.

Bukayo Saka has done admirably in an unfamiliar position since being called upon. He followed up an impressive defensive performance vs Chelsea with a jaw-dropping outing against Bournemouth in the cup.

Now Arsenal are seemingly willing to five their academy player a new deal, amid interest from Liverpool, Manchester United and Bayern Munich. Our readers share their thoughts on the whole situation.

💬 ellyson splendor: “It's amazing to see a £3K earner playing first-team football in the Premier league. I don't know how much Martinelli earns per week, but these kids have to be offered big contracts to reward their efforts - before our opponents reward them.”

💬 Adekunle Damilola: “He was an academy player, do you expect Arsenal to pay him $60,000? C’mon, surely he will earn more than he does now but give it time.”

💬 Mustafa Rayif: “Imagine you could have 115 Sakas for Ozil’s wages.”

💬 Kufre John: “How is £3k poor? For his level, it's actually kind of a good deal. My concern is the unnecessary lingering and almost running down contracts before offering extensions. Imagine a player like Saka with a contract that ends in 2021. The lad has been impressive in the reserves for years now.”

💬 Shittu Akeem: “Why do people reason like this? Surely the improvement in wages must come gradually? He’s fresh from the academy, they shouldn’t be paying him £200k at this stage.”

💬 Olaconcept Wears: “The boy is worth more money than this, he's performing better than some of the highest-paid players. C’mon, splash the cash on this lad.”

💬 Kingsley Otaru: “Remember Saka was not included in the first team list from the beginning of the season and was not a part of the senior team. Anyway, a new improved deal will see him earn a reasonable amount of money. Remember Iwobi started like that too, so no big deal.”

💬 McVivien: “This is so unceremonious. Why go public with such a deal? If Bayern or any other team come for him with a better wage offer, will we say he was not loyal to the club and went after money? Arteta and Edu better resolve this issue quickly.”

💬 Adedayo David Adefila: “When I read some headlines on here it’s baffling and worrisome. How can Arsenal be trying to improve Saka's £3,000-a-week deal only now? He’s such a talented and versatile player.

“I am of the opinion that his contract should have been upped without any publicity. The improved offer should have been in place long before now. Instead, we are washing our dirty laundry in public.”

💬 Guelor Koka: “He has come from the academy, this is his breakout season. What exactly did you expect an 18-19-year-old coming out of the academy to be earning? The big contracts will come naturally as he improves!”

Does Bukayo Saka merit a payrise already and how do you think he should earn in the current market?

Arsenal
Standard: Bukayo Saka and Sead Kolasinac closing in on returns to the squad
23 4
7 days ago

No club pays an academy player 50k, 60k or 100k a week, remember. So, why are we abusing our club for this.. Saka was brought from our team B, so they renew his contract that's when they will improve his salary, that's how every club does. And if Saka is not performing well, I believe nobody will talk about improvement. Yes he deserved it, but, it will be done when he renew his contract...

Thompson Omoba Omokhaye5 days ago
Reply to a comment by MS

I just weak for the fan we get oh

Don’t let any other club get him....give him a sweet long deal ASAP!!!

yeah. Martinelli deserves a whopping new deal. He's the most likely playing to be tempted away. Can you imagine the horror of losing him to the Mancs??