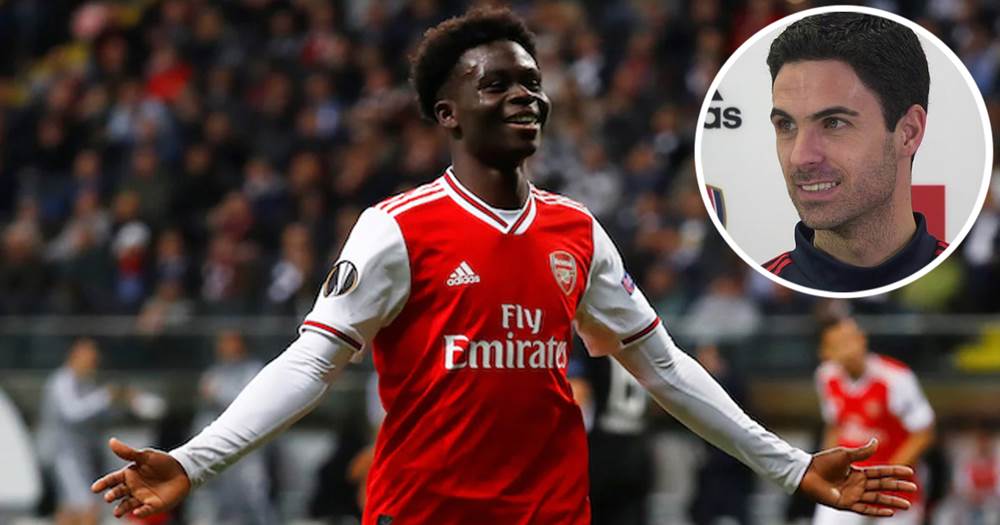 United, Liverpool and Bayern are said to be sniffing around Bukayo Saka (h\t the Daily Mail) as his contract expires in 2021. The boss was asked at the press conference what are the club's plans over the 18-year-old.

"I am really happy with how the [young players] are developing," Mikel Arteta told reporters as quoted by Arsenal's website. "Part of that development is to improve the contract and to tie them to the club.

"But that has to follow a natural process. We have Edu, we have Raul, Vinai and Huss [the club's chiefs] who are in charge of that and I am sure we will do the right thing when players deserve to improve and extend their contracts."

The teenager is on a £3,000-a-week deal at Arsenal. Naturally, the club have to offer improved terms to the player who is a part of the senior squad.

The youngster's role in the team is growing. He has successfully deputised for Sead Kolasinac and Kieran Tierney at left-back. Overall, he's contributed to 9 goals (3 goals and 6 assists) in 24 appearances for the Gunners this season so far.

Arsenal
'Can have 115 Sakas for Ozil's wages', 'What do you expect an academy player to earn?': Arsenal fans react to Bukayo's potential new deal
16 17
5 days ago

GET THESE NEW IMPROVED CONTRACTSDONE, Its not rocket science what needs to be done WE HAVE WITNESSED TO MANY TIMES, WHAT HAPPENS WHEN YOU DRAGG YOUR FEET OVER SIGNINGS OR EXTENTIONS, As we recently experienced with Chelsea and Ziyech.

This does not need the said chiefs to be rocket scientist to give SAKA a nice deal the worst he can be given now is £65k per week. We should not lie to ourselves that Arsenal will keep him with £3k salary. By yesterday this boy should have signed the contract with a release clause of £200M

Saka is going no where