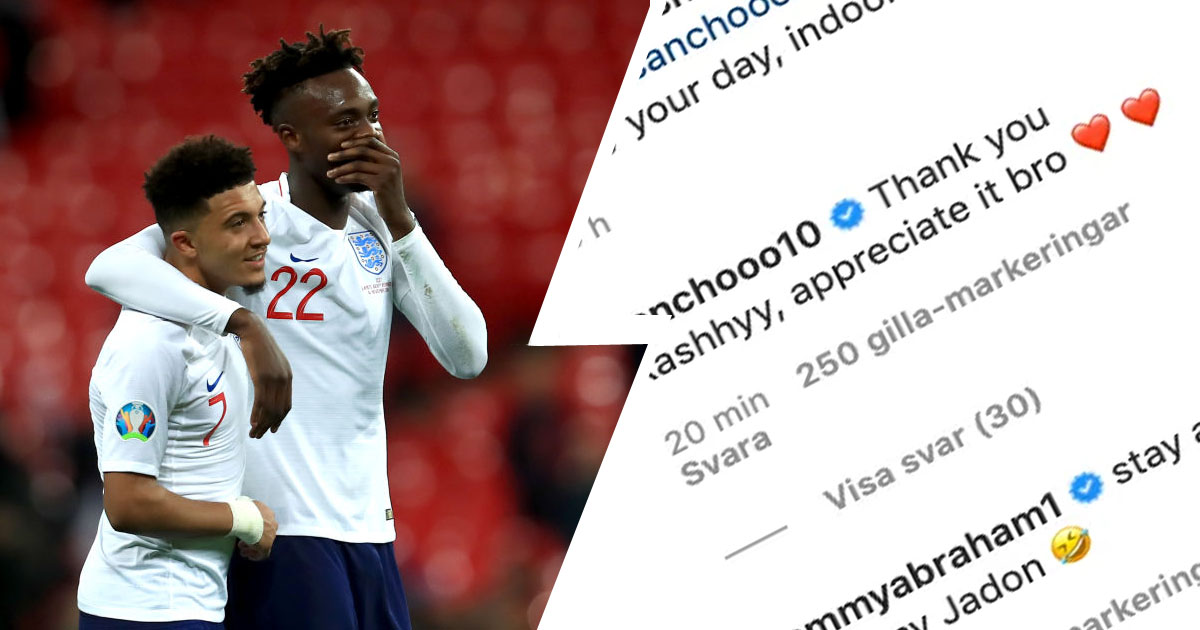 Chelsea striker Tammy Abraham has jokingly warned Man United star and England international teammate Marcus Rashford to 'stay away' from Jadon Sancho, who has reportedly been linked with the Blues and the Red Devils ahead of the summer window.

Sancho celebrated his 20th birthday on Wednesday this week and Rashford, who shares a close bond with the Borussia Dortmund starlet, sent him greetings on Instagram, writing: "Happy Birthday Bro!! Enjoy your day, indoors!"

Abraham, who was born in Camberwell along with Sancho, came up with a light-hearted response, writing: "Stay away from my Jadon".

The Chelsea striker's comment has since been deleted but it's quite clear that Abraham is ready to welcome Sancho with open arms at Stamford Bridge this summer, having risen through the ranks of youth football in South London.

Sancho had a breakthrough season at Dortmund last term, scoring 13 goals and providing 19 assists, and he has already recorded a solid tally of 17 goals and 19 assists this season so far, including 14 goals and 16 assists in 23 Bundesliga fixtures.

Despite such a young age, the former Manchester City Academy kid is already a regular for England, having won 11 international caps.

Last September, the attacker scored his debut goal for the Three Lions - a brace in the 5-3 win over Kosovo in the UEFA Euro 2020 qualification.

Valentine C. Ogunwa
8 days ago
•••
Reply to a comment by Ibrahim Habeeb

Ibrahim Habeeb
8 days ago
•••
Reply to a comment by Valentine C. Ogunwa

Valentine C. Ogunwa, I. is a little. bit sensitive Tammy has even deleted it

stop it. they are friends. its call friends having a laugh. where is your humanity

Tammy please convince him to come to us. Also Cho. Guys we need you on the pitch but also in this situation!!!!!!!

Tammy say him to stay with us...