Tribuna
/
Chelsea
/
News
/
Carlo Ancelotti 'not surprised' by Frank Lampard's rise to stardom as manager, tips John Terry to follow in his footsteps 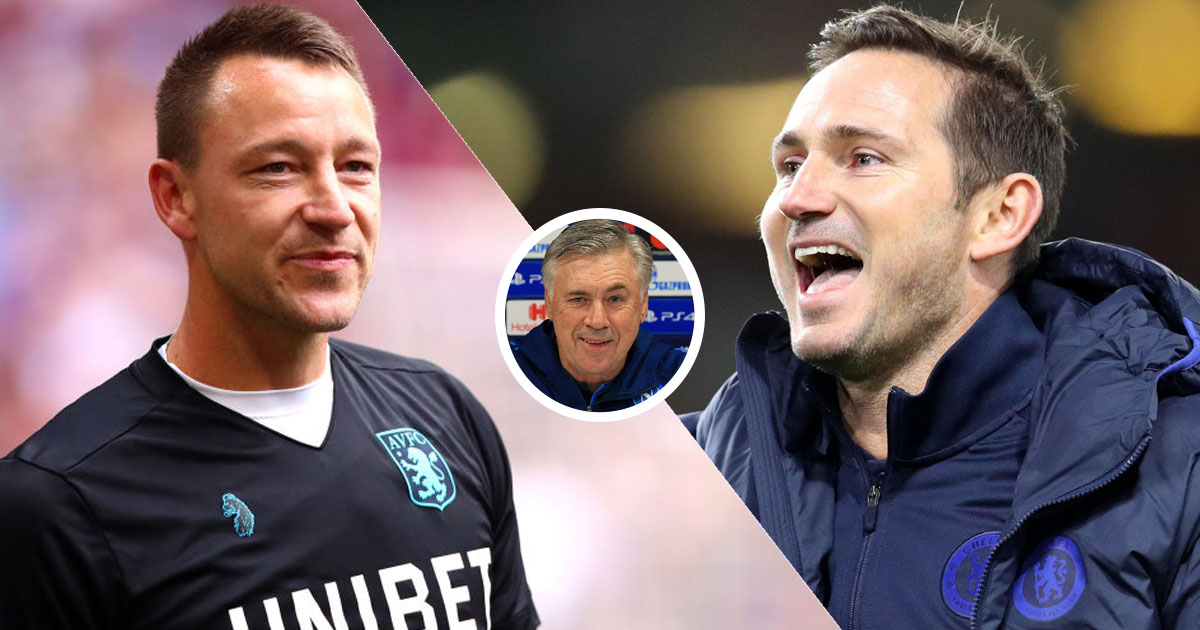 Carlo Ancelotti 'not surprised' by Frank Lampard's rise to stardom as manager, tips John Terry to follow in his footsteps

Frank Lampard's meteoric rise to stardom as a manager at Stamford Bridge has taken plenty of critics by surprise but ex-Chelsea boss Carlo Ancelotti has said that he is not at all surprised to see his former player making the grade as a manager due to his sound tactical knowledge of the game.

The Italian also had the opportunity to coach John Terry during his illustrious stint in West London and the 60-year-old feels that the former Blues skipper has what it takes to follow in the footsteps of Lampard to evolve into a very good manager himself.

"I’m not surprised [to see Lampard as a manager] because as a player, Frank had fantastic tactical qualities," the Everton boss told Sky Sports in an exclusive interview.

"I’m waiting now for Terry as a manager, now he’s an assistant, but I think they both have the qualities to be a good manager. Of course, Frank is doing really well at Chelsea now."

Ancelotti, who is currently in charge of Everton, certainly holds a special place in the hearts of the Blues faithful, not least for his tactical brilliance during the club's 2009-10 Premier League and FA Cup double-winning campaign.

Inspired by Didier Drogba's 29-goal haul and some significant contributions from Lampard and Florent Malouda, Chelsea crossed the 100-goal barrier in the league that term, thus becoming the first club to achieve that feat in a single PL season while their goal difference of +71 also set a new record in the English top-flight.

Here's a collection of some of Chelsea's best goals from Ancelotti's 2009-10 double-winning season:

Meanwhile, Lampard certainly deserves a lot of acclaim for guiding the Blues through a testing period of transition in the ongoing campaign, despite having to cope with the transfer ban and the departure of star winger Eden Hazard.

Chelsea were in a position of strength to secure Champions League qualification before the coronavirus outbreak led to the postponement of the campaign. Terry, though, hasn't had a lot of luck at Aston Villa, who are currently struggling for survival at the wrong end of the PL table.

Would you want to see Lampard and Terry work together at Chelsea? Share your thoughts in comments or join our new blogging platform!

Lampopo Lampard, how I wish I could meet you someday🙏🏼 Very soon you will be one of the greatest manager of all time🙏🏼🙏🏼🙏🏼 #BLUE-IS-MY-BLOOD #BLUE-IS-THE-COLOR 💙💙💙💙💙💙💙