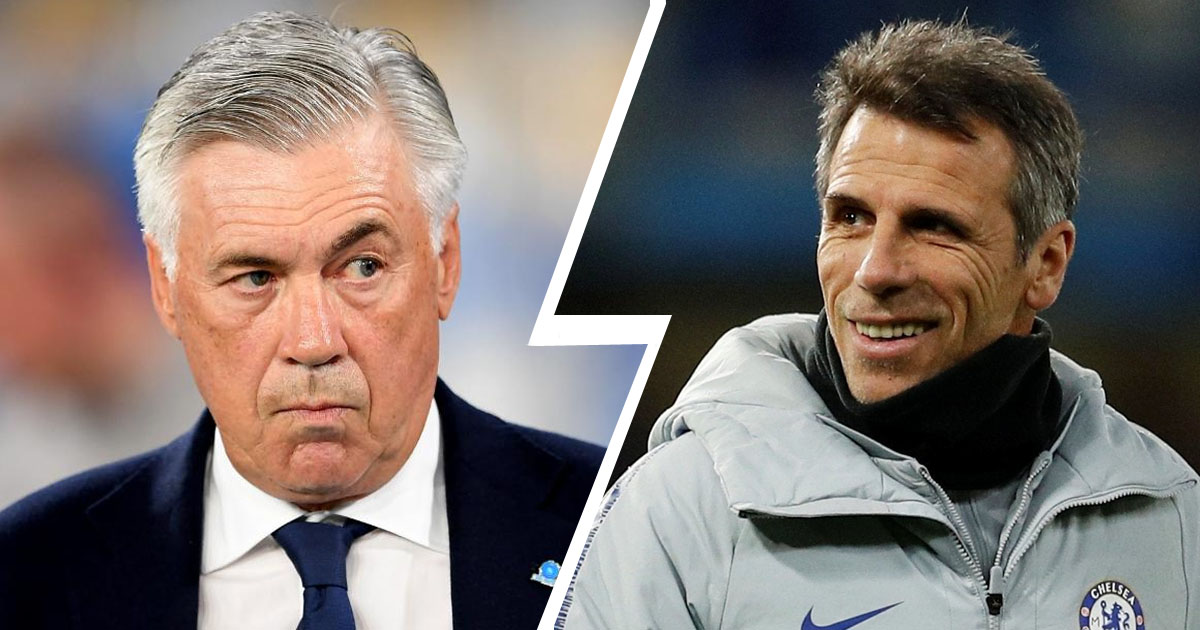 Carlo Ancelotti and Gianfranco Zola both hold a special place in the hearts of the Chelsea fans. One of them inspired the club to a domestic double with his tactical genius as a manager while the other lit up Stamford Bridge as a player to go down in the history books as a legend. However, there was a time when they worked together.

That was way back in 1996 at Serie A outfit Parma but their association in Italy wasn't at all productive. Ancelotti has revealed his inability to accommodate Zola in his rigid 4-4-2 system led to the offensive playmaker's departure to Chelsea in January 1997. This sparked the beginning of the player's truly remarkable career at Stamford Bridge.

"Parma was the first top professional team that I managed and I had [Gianfranco] Zola in that period," Ancelotti told Sky Sports in an exclusive interview.

"At the beginning, I was playing 4-4-2, I was not playing with a No.10 in that period so in the first game of the season I tried to put him [Zola] on the right side like a winger.

"He didn't like it a lot, he did well in my opinion, but he would like to play in the middle. So having [Hernan] Crespo and [Enrico] Chiesa in front, I found space for him on the right side, but he was not so happy.

"At the same time, he had an opportunity to go to Chelsea and in the January market, he chose to go there and I let him go."

Ancelotti's successful playing career in Italy was followed by his first job as a manager at lower division outfit Reggiana before he got the opportunity to manage a Parma side.

Here's a collection of Zola's top 10 goals for Chelsea:

He later went on to manage Juventus and AC Milan in his homeland, winning the Serie A title and two UEFA Champions League crowns with the latter, before moving on to join Chelsea, where he guided the Blues to the Premier League and FA Cup double in his debut season.

That was followed by league and continent successes at Real Madrid, PSG and Bayern Munich before he returned to England with Everton earlier this season.

Zola, on the other hand, went on to establish himself as an instant hit among the Chelsea fans, winning 2 FA Cups, the League Cup, the UEFA Cup Winners' Cup and the UEFA Super Cup over the course of his illustrious stint before departing in 2003.

The Italian magician scored 80 goals in 312 appearances for the Blues across all competitions and will always be held in the highest regard as a legend at Stamford Bridge.

Ancelotti, too, continues to be remembered fondly by the club faithful and the fans will probably not hesitate to thank him after reading this, given that he played a big role in Zola's move to Chelsea.

Carlo Ancelotti 'not surprised' by Frank Lampard's rise to stardom as manager, tips John Terry to follow in his footsteps
29
1
7 days ago
John Terry explains what makes Carlo Ancelotti unique among manager he worked with
19
6
21 day ago

Oh yeah, thanks to Carlo for the revelation. You have been key in the development of Chelsea FC. what a secret admirer you are. Thanks for coming out in the open telling your involvement in Zola's move to Chelsea. And later you came and managed the club and did well as well. Just like Jose, we will always appreciate your service to us. Well done.

Scam get the fuck off here