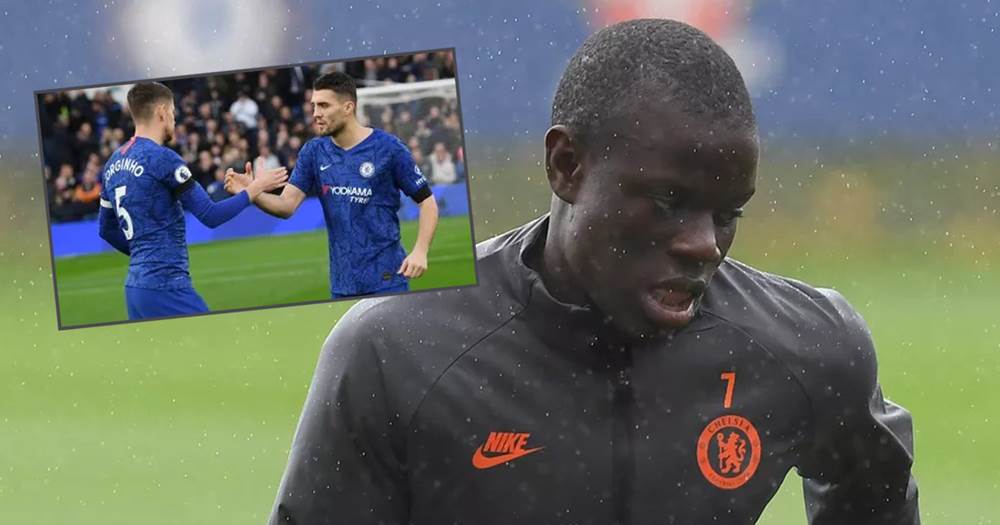 This sounds almost like blasphemy yet at least two Blues on Tribuna.com say it's true.

"Kante is the biggest player in the Chelsea team, I know that for sure, but without him, Chelsea is doing much better. Chelsea style of play doesn’t need Kante, period!" 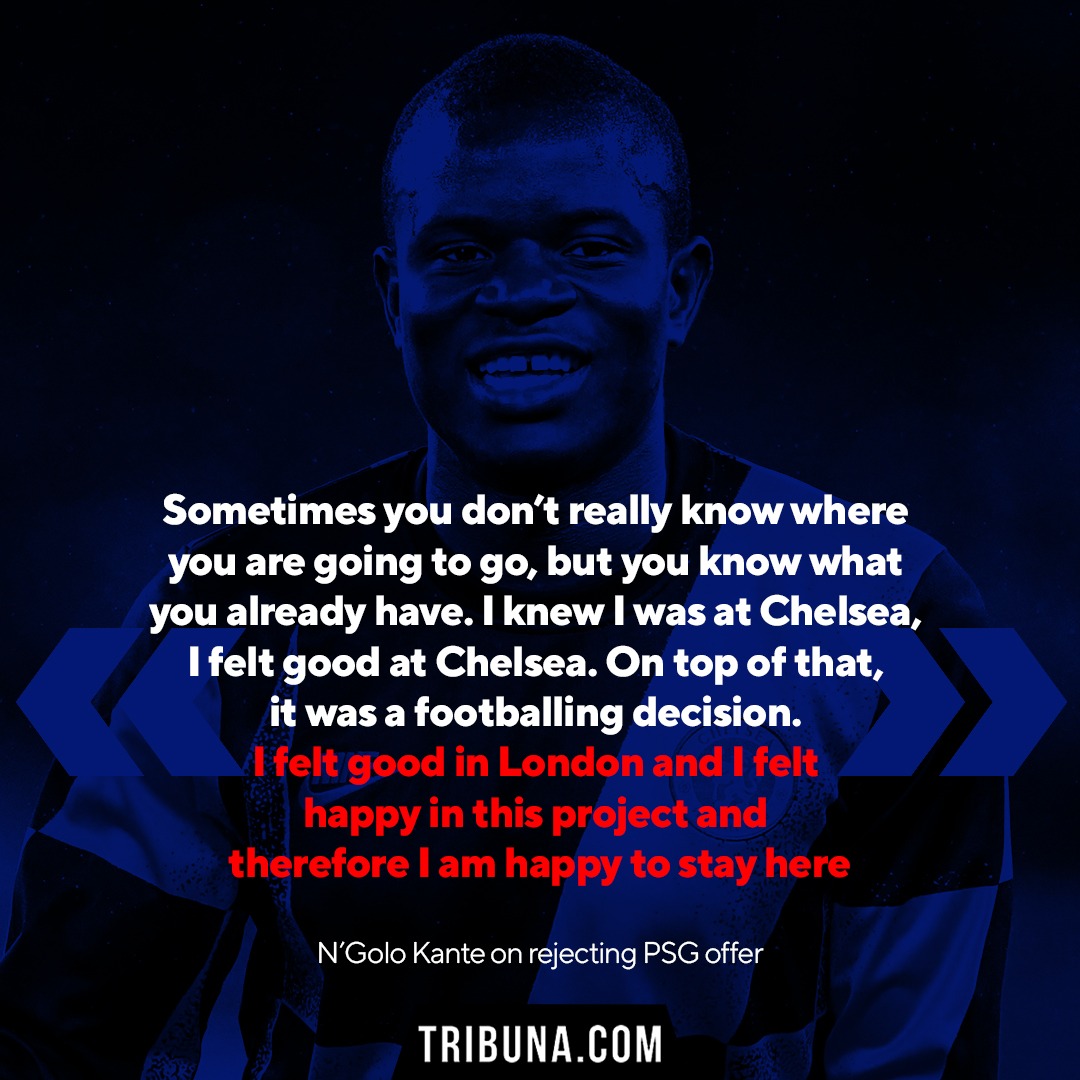 Another fan, Oluwagbemileke Olayinka Charles adds: "Kante is a defensive midfielder. Asking him to play up front or as a box-to-box midfielder is not helping him at all. Of course, he delivers some attacking play because he is simply a hardworking player, not because he is evidently natural in this position. Our winning streak happened when he was injured.

"I hate to say this but Chelsea is a better side when N'Golo is not playing as an attacking midfielder. He should be a direct sub to Jorginho or vice versa.

"I hope the rest of Chelsea fans get my point. Just tired of seeing him run aimlessly. Let him either sit in front of the defenders or let him come in as a sub when we need to tighten things up after a lead."

❔ However strange it sounds, how can Kante make Chelsea better?

'He's very comfortable as a failure': Chelsea fan gives up on Batshuayi
45 56
15 days ago

Just one win against a mere Burnley and they have started their bullshit already. Sit him out when we face the big teams and see the result.

King Danito7 days ago
Reply to a comment by Kwe_ku

It still doesn’t make sense. Why don’t we sit him out on bigger occasions ?? Sometimes u gotta be real a bit

Prince Mark7 days ago
Reply to a comment by Kwe_ku

it is true I observed that myself

Brent Thomas7 days ago
Reply to a comment by Kwe_ku

Olayemi Olaitan7 days ago
Reply to a comment by Kwe_ku

you have said it all

NGolo Kante is the first name on the team sheet playing in his position or out of his position, he is one of the best and one of most recognizable players on our squad, Odoi who is a master shit, is forgiven for being injured, but NGolo that give us all playing injured on The UEFA final and UEFA super cup game, never recovered for that injury till this date, is told to leave Chelsea by some supporters, no wonder no one wants to come and play for us anymore! I clearly remember that some supporters called Costa, Fabregas and Hazard: RATS while the team was having a terrible form after winning the EPL under Mourinho, no wonder today Kante is the villain for some of the same “fans”, The receipt for being successful is consistency and good coaching, ask Barcelona, that regardless of winning 2 la liga titles, and on top of la liga this season, fired Valverde for loosing a cup game! I wonder what Messi would look like today playing at defence midfielder! Long life to Kante, our best player, and ONE of the few that is a credit to the game of football, FACK YOU HATERS!

Amadi Henry7 days ago
Reply to a comment by Nowayout

Brent Thomas,Lampard doesn't know how to play with a three man midfield, except the lille game that's why jorghino gets lost ,when they play three of them ,

janine Jansson7 days ago
Reply to a comment by Kwe_ku

Solomon Bbenks5 days ago
Reply to a comment by Nowayout

He's playing in the wrong position. This guy is the best defensive midfield player in the world. Why do we ask Jorginho to tackle when he can't. Play Kante in his normal role. He won 2 EPL, s and a World Cup doing it. If it's not broken, don't fix it.

drogz7 days ago
Reply to a comment by Cyril Price

Cyril Price7 days ago
Reply to a comment by drogz

Alfred Akossou7 days ago
Reply to a comment by Cyril Price

Cyril Price you're one of if not the only one whose comments I always read on this site cos your comments are always on point.

Cyril Price7 days ago
Reply to a comment by Alfred Akossou

all of you saying kante normal role don't know anything about position on field of play at all.... he has been a box to box midfielder all along but in a different tactical shape... he lost form fine all players do he is no alien but saying bring him back to his normal role is just pure nonsense.... he has never played as a central midfielder I repeat never played as a central midfielder before even in the national team pogba plays central midfielder while kante plays box to box and matuidi plays like Kovacic does play for Chelsea AMF... he is fine he just lost form due to recurrent injuries due to old age and too much work he has done in the past catching up on him.... he is still a box to box midfielder and will always be.... a machine cannot retain its 100 Percent effeciency always

if you look back at his days in Nantes Nantes plays 4-3-3 formation he plays as RMF or LMF covers much grass as possible.... in Lester they don't play 3 man midfield.. they play 2 man midfield under ranieri... he partners drinkwater who was more of a distributor passer of the ball and kante was his box to box protective shield in a 4-2-3-1 formation the two midfielders move up front in a simultaneous pattern when kante drops deep drinkwater moves further when drinkwater drops kante moves further in Chelsea under Conte we play a 3-4-3 using fabregas... to partner kante this is a more different tactics fabregas and kante also alternate their movement yet once kante goes up he covers back quickly that's a box to box midfielder so quit saying nonsense understand the game and it's roles before saying bring him to his normal position he doesn't have a normal position he has been playing that box to box role in different patterns and tactical shape... go and understand tactical analysis pls

Olanrewaju Adebola7 days ago
Reply to a comment by Cyril Price

Olayemi Olaitan7 days ago
Reply to a comment by Cyril Price

You are crazy for saying that about kante . Condemning a talented player like kante is laughable. The only thing that make sense is that he should be used in his position and not allowing him to attack. He is not a very good goal scorer. He is good at destroying opponents moves

zico7 days ago
Reply to a comment by Tina Ukaiji Omodu

to the one that said Chelsea is good we without Kante should go back and do his homework. Right now as I speak there is no midfield defensive player like him when played in his natural position. So you better off not bringing that up.

I don't understand you guys, Kante has always been a box to box midfielder right from Caen in France ligue 2 up till Chelsea. it was only last season he was pushed a bit further. He cannot play the static No 4 role like Makelele. His skill set and position demands he moves up and down the pitch breaking up play. Don't just watch football to celebrate goals and acknowledge wins. Try to make out the players' roles

Ebuka Okonkwo, I wish I can hug u brother, urs is the best analysis by far

Ebuka Okonkwo, I wish I can hug u brother, urs is the best analysis by far (claps)

Ebuka Okonkwo, Is 4 a static position in football?? ask your self this questions and answer it, you cover your backline in danger and break up opponents atacking play all over the pitch