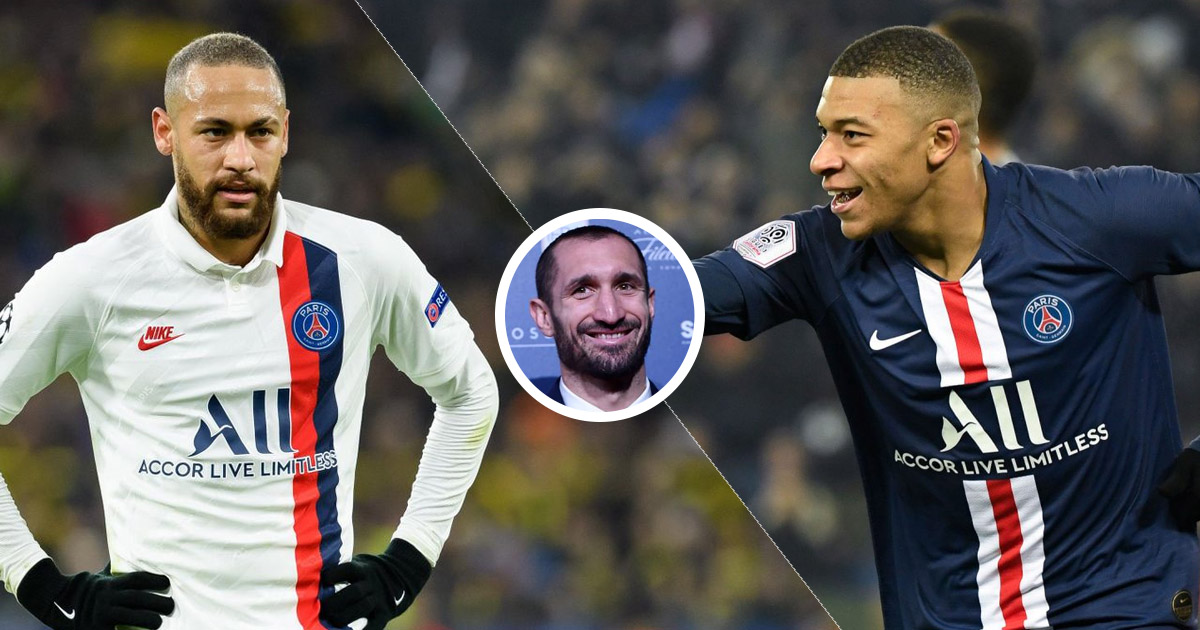 In his biography, Juventus captain Giorgio Chiellini shared his thoughts on Neymar and Kylian Mbappe. The Italian stalwart backs the latter to take over when Leo Messi and Cristiano Ronaldo are done.

"Who's destined to be the next world star and collector of Ballon d'Or when Cristiano and Messi stop playing? It's the Frenchman Kylian Mbappe, a truly unique player!

"The first time I saw him on TV was in the 2016-17 Champions League, during Manchester City-Monaco. Impressive.

"At the end of the first half, I asked Fabio Paratici: "Who is he? Which planet is he from?"

"Fabio replied: "Yes, I know. We've known him for some time"... An unstoppable striker, he was just 18 years old.

"We would face him in Europe that season, in the semi-finals. Now he's 21 and already a world champion. Pace, technique, instinct... he's not lacking in anything.

"He's a player who makes an impression, a priceless masterpiece. I also think Mbappe's better than Neymar, more consistent. The future is all his."

So far this season, Mbappe has registered 30 goals and 17 assists in 33 matches across all competitions. The season in France is over but the youngster can still add more goals to his tally when the Champions League returns.

The forward is said to be Real Madrid's top target while Barcelona want to bring back their former star Neymar.

Check out his best league goals from this season:

Should Barca switch their focus from Neymar to Kylian Mbappe? Tell us in the comments or use our brand-new blogging platform!

Neymar: 'I'm training nearly every day, I try to stay in shape'
38
12
16 days ago
Ex-Bayern great Elber: Barcelona shouldn't sign Neymar back, he treated them badly
29
17
14 days ago

people should know that in life, there is time for everything, Neymar is gone, and when we say that neymar is working on past glory, people argue. Neymar era is gone, Mbappe is far better than neymar, the neymar of today can not bench Dembele , if you like bring neymar to Barcelona. Barca don't need neymar again please

JEDIDIAH ZION ,it may be nonsense to you, but that's the truth.

Neymar is better but age and injury isn't on his side. So mbappe got edge

that's why Mapped is better than him now.

Neymar left bcos he wanted to be the best in the world,now let Mr ask u this quest.do u think if neymar is the best player in the world now he will comeback,no he wouldn't, he once said everyone thought wen u leave Barcelona u die,and u don't die wen u leave Barcelona, I think that was he's first two weeks,and they interview him,if u like go and Search it on google,he is making jokes about Barcelona, and now he wants to comeback,Messi cannot do anything if we sign neymar and doesn't performed well,Messi wants neymar back he is his friend,neymar friends has tell him that if he wants to go back to barcelona he should beg messi, and pass through him cos he is the only one who can help him now,messi also as a good friend cannot ignore him,can't u see neymars friends started making campaign for him last yr,cos he has tell all his friend s they all said they will help him,all his friend s last yr were wearing Barcelona Jersey here and there, neymars time has past pls