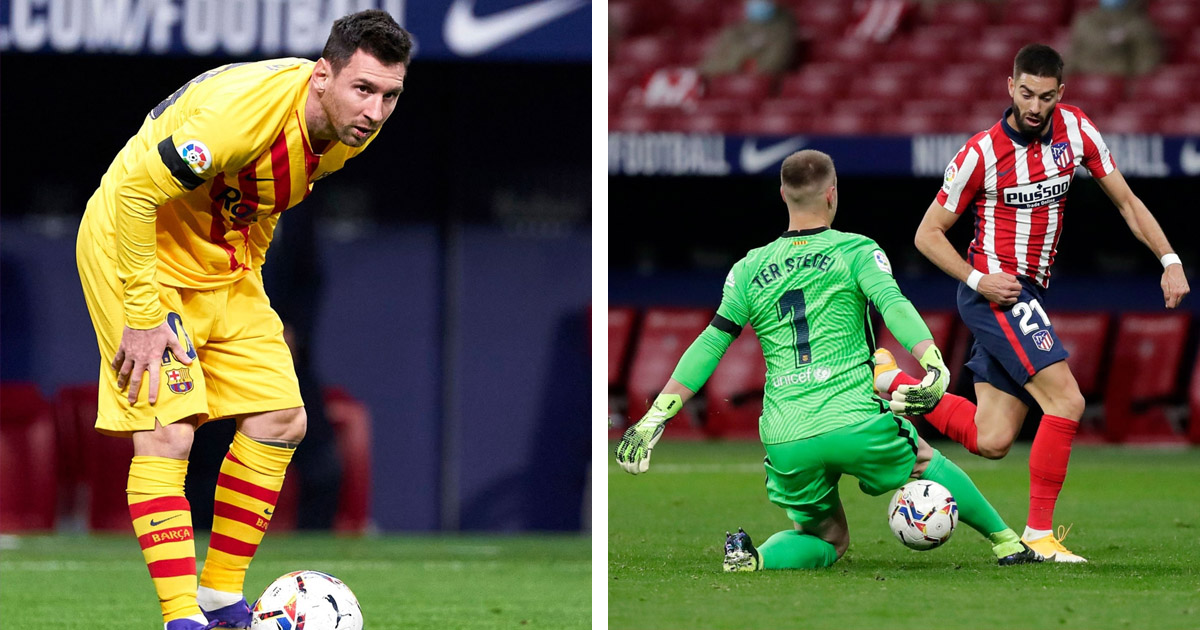 Besides the poor result, our performance was truly embarassing.

Pedri started on the left wing against Atletico Madrid but failed to produce anything big. The youngster clearly lacks the fitness to face such teams as Atleti, losing one duel after another.

Having your goalkeeper play high sometimes wins you matches and sometimes loses them. This time around, the risk Marc-Andre ter Stegen assumed cost Barcelona the game.

Antoine Griezmann had a good chance to score early in the game but he wasted it. The Frenchman was barely noticeable for the rest of the match.

Leo Messi is far, far away from being at his best. The Barcelona captain created a few chances during the match but also lost a lot of balls and his dribbling was off.

Ousmane Dembele was Barcelona's best player on the pitch against Atletico. The Frenchman was especially dangerous in the first half, creating several dangerous chances. Unfortunately, his performance dipped in the second half.

FC Barcelona: A club without offense, midfield, or defense; a club without leadership, vision, strategy, or project; a club where the best player in the world is held hostage and sabotaged by the greed, recklessness, selfishness, and carelessness of the Bartomeu legacy; a club I love in disarray and shambles. Diego Simeone ran into the tunnel after the final whistle with a pep in his step and a fist pump. He had achieved at last what he couldn't do in seventeen tries; he had slain the dragon. Except this FC Barcelona is no dragon; we are a pussy-cat team playing in a league of dragons and lions. All we have now is the shadow of the three headed dragon we once were. Messi had a wince in his eyes as he walked off the pitch; it was a walk of shame; a man who cannot believe his legacy will end like this. I hope he leaves and gets a chance to fight again somewhere where there's a project worthy of him. As for this Barça, the league is over, and EUEFA is a long shot miracle. Most of the team needs to be replaced from the back to the front. Griezman? Enough is enough. Let's stop being sentimental. He has no business being on this team. Sell him and go buy players that fit the profile. Otherwise we have no money, and cannot offer any serious minded player any reason to come and join this mess. The new president and board have so much work to do. By the way, I am not entirely sold on Koeman; I never was, but I am even less inclined now. These desperate 83rd minute subs are so ridiculous! Forget about rating individual players. Let's just rate this Barça team 0.

Liverpool Dandy
4 days ago
•••
Reply to a comment by Soccerates

Thank you for providing a dam good overview. Tired of sh*tty ones. I 100 percent agree with you. Watching Barca, I saw no meaning and no heart. ATM had meaning and had a soul. Beautiful play from them.

i don't totally agree. it is always difficult to play against teams that sit deep. even Liverpool would suffer. we were unlucky to take the first goal. playing ATM for any team is always difficult. let us continue to support our team no matter what. that is not the end of life. and not the end of the season. Bayern was suffering last year until December they ended up winning everything. Visca Barca.

Liverpool Dandy
4 days ago
•••
Reply to a comment by Soccerates

I have had no doubt in supporting this team throughout all the hardships. And I wouldn’t say we were unlucky. ATM deserved it, and we caused our own problems. It wasn’t unlucky, it was poor. And yes it is difficult, but when you see these top tier clubs competing, you expect them to perform properly even against the toughest of clubs. No excuse

Oluwaseun Oluwaseyi
4 days ago
•••
Reply to a comment by Soccerates

what this stupid coach need its to remove griezman out of his squads ...griezman don't know how to use ball athletico madrid style of play he's playing for barca

Martin Braithwait is not a perfect player but is far better than Griezman. Griezman is a complete flop and waste of playing time. Dest would have been better than Roberto on the RB position, I still don’t understand why this coach can’t see it yet. When you face a ram like ATM, u want to use ur best players first to secure the game before making stupid subs. The goal wasn’t much of MATs fault, it was Pique’s fault... he failed at a simple ball control and in fact there were two Barca players trying to control a simple pass and the ATM player picked their pocket. I see a lot of post blaming Messi... well, if I were Messi, I would be worse off... the club is ending Messi’s glorious career in a very bad fashion... I pray Messi leaves this January to a more deserving club. Lest I forget, Dembele seem to be the only thing working in FCB now and news reaching me, he might be leaving soon. Way out of this mess: 1. Sell Griezman and get Neymar back. 2. Sell Coutinho and buy a proper striker like Haaland who is not expensive. 3. Do away with Busquete, Pique and Riberto.... we can rely on FDJ, Pjanic, Puig, Messi, Pedri, Alena on the midfield. 4. Our entire Defence line apart from Dest must be changed. There are cheaper central defense today who are far better than what we have now. Neymar. Haaland. Dembele Messi Fdj. Pjanic Alaba. Umtiti. Upamecano. Dest

Ishmael D. Peterside
4 days ago
•••
Reply to a comment by Moses blize

Moses blize, I agree with you but they should step up the bite in midfield and upfront. I believe Barca has all it takes.

Moses blize, you have to agree.do we have materials to fight for the league.this is not the first time we are meeting sittted teams but at last we will carry the day despite the might sit back.lets overwhole the club or else we will run trouphyless this year believe me

Adam Bilal, trust me I see how this team play every match. Any team that plays against us sits deep and counter attack. Even Pep is having trouble with this system, you play football the opponent doesn't play football. Pep lost versus Mourinho who sits deep and counter. playing with these teams u have to score first otherwise u will suffer. But do you score but to attack that is our system attacking football. unfortunately we don't have fast defenders that can cope the gap behind when we play up. But I will support my Barca to death. we r into transition. the future will be bright and the road is long.

Yeah let the best player in the world leave because of one game. Your outta your mind. Not saying that he played well today, he didn’t. But just stop, I’m sick and tired of you people saying that it’s time to sell him

Your right on that. Messi today I feel looked tired. He came back from tough internationals, 15 hour flight, only 1 training. Koeman should have been smarter and subbed him on in the 2nd. And, yes like we have already noticed we can’t just depend on him to produce magic. He can no doubt produce magic but it’s an unbalanced system.

Last Five,And when he came on what happened? Did Messi stop other players from playing well? Let me ask you, what was the game plan for this match, could you see any?

I don't know why you guys are arguing here Messi is best player yes but everything has an end why can't some people get that since start of this season you can see that Messi his near his end and to me i guess he should not play every minute of every games ,he should be at times on bench like we saw xavi and Iniesta when they were near Thier era how they've been use

The same way you all asked for Suarez to go. Now since he left, the team has been playing wonders right? You ended up without a no 9 to unsettle your opponent defence. Is Messi your only player? If he had a bad day, what about others? So why are singling him out? The entire team played badly, simple and short.

u bought semedo and used Roberto who's not a rb noe koeman is repeating d same thing with dest, always using pedri,i can't believe pedri plays ahead of puig, koeman is not the right man for this job

Winston Hayford, sometime admin is very strange decision to banned someone, I experience that my self before bro 🤔

quality
4 days ago
•••
Reply to a comment by JESSE ROCK

bartomeu blood is running inside the admin vein

I don’t just know ? They are just being sentimental like Barca officials

I have noticed that most of the people saying Koeman must go are being banned by the admin. What’s happening here?