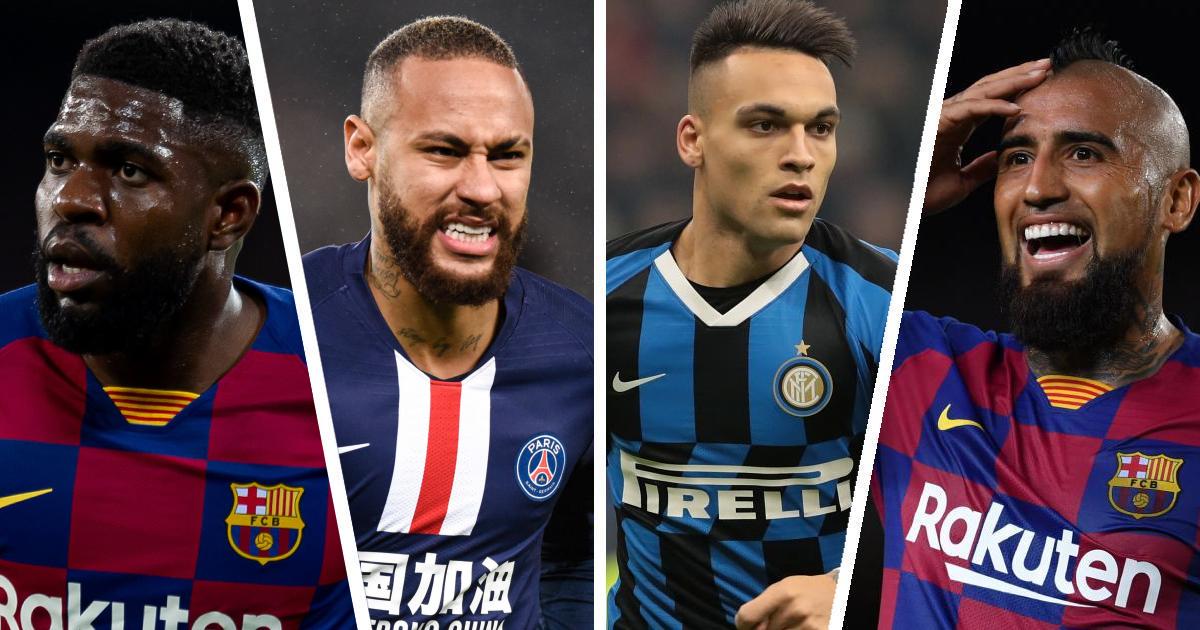 The season may have been suspended, but the transfer rumours just keep piling up... Tribuna.com have you covered.

Diario Sport stated last week that Barcelona are looking for a centre-forward, a midfielder, a centre-back and a left-back. It remains to be seen who the Catalans are going to sign following the coronavirus financial crisis.

Still, the club are determined to offload several players to balance the books.

Let's have a look at Barca's most-talked-about potential arrivals and departures.

According to La Gazzetta dello Sport, Inter have rejected Barcelona's first bid for the Argentine striker. The Catalans offered €70million plus Nelson Semedo and Arturo Vidal.

Moreover, transfer guru Gianluca di Marzio doubts whether Barcelona could afford to sign both Lautaro and Neymar which is believed to be the club's priority transfers in summer.

👉Deep Dive: What is Article 17, how could it help Barca bring back Neymar and what are the risks?

As we've already mentioned, there are doubts about whether Barcelona could afford to land both Neymar and Lautaro Martinez. Still, the Brazilian is believed to be Josep Maria Bartomeu's priority signing, Sport claimed on Saturday that the prodigal son would do everything to rejoin Barcelona.

According to Goal, the promising midfielder has rejected Valencia's second contract offer which would see him amongst the top earners. His deal expires in 2021. Torres reportedly wants to join Barcelona but his whopping €100million release clause could pose a problem for the Catalans.

Tuttosport predict a heated race for Ferran Torres with both Barcelona and Juventus involved.

Bild were the first to report on Alaba's intention to leave Bayern Munich before his contract expires in 2021. He has already appointed Pini Zahavi as his new agent to facilitate the potential transfer.

However, Diario Sport don't believe that Alaba could end up at Barcelona because the Catalans couldn't meet his huge financial demands.

Given Sane is also wanted by Real Madrid, Barca are unlikely to push for this transfer. Still, Sane could be a younger and cheaper alternative to Neymar.

Originally considered to be Barca's plan B to land a striker, the German is now closer to Liverpool following the reported 'massive breakthrough' two weeks ago. Meanwhile, Mundo Deportivo stated that Werner is no longer an option for the Catalan giants.

Unlike Werner, Arsenal's captain still appears to be one of Barca's targets. Sport claimed the Gunners would ask for €55million for their striker. The Gabonese is also wanted by PSG and Manchester United who could possibly hijack the deal, as per The Sun.

The Chilean is unlikely to stay at Barcelona beyond the 2019/2020 campaign. Mundo Deportivo link him with Manchester United and Juventus while Sport believe the Catalans could use him in the potential deal to sign Lautaro.

Moreover, Gazzetta dello Sport have recently revealed that Inter rejected Barca's €70m plus Vidal and Semedo offer for the Argentinian.

Barcelona are determined to sell the Croatian and have put a €20m price tag on the midfielder, Sport reported last week. The same source also named Rakitic's likeliest destination which is going to be his former club Sevilla.

Sport were the first to report on Barcelona's intention to put the Frenchman on the market. Instead, they would sign a younger centre-back who wouldn't demand a huge salary.

The Mirror name Arsenal and Manchester United as the main contenders to land Umtiti.

👉Deep Dive: Umtiti or Lenglet - who are the biggest winner and losers under Quique Setien's regime?

Sport rebuff claims made by AS that Barcelona could consider offloading Ousmane Dembele because of his injury history. The Catalan source insists the club fully trust the Frenchman and want him ready for the pre-season.

However, Tuttosport believe otherwise. The Italian news outlet claim that Dembele could be included in the potential deal to bring Lautaro Martinez at the Camp Nou stadium.

On Sunday, Sport made a staggering claim that Barcelona don't see the 29-year-old as part of their future project and could use him as a makeweight in the potential deal to sign Neymar. This report was completely denied by Mundo Deportivo some hours later.

On Monday, Sport made a sensational claim that Bayern Munich are closely monitoring the goalkeeper's contract situation at Barcelona.

Even though it appears to be true that the talks on Ter Stegen's new deal have stalled, the Bavarians have just signed Schalke's shot-stopper Alexander Nubel and have no need in another goalkeeper.

We should keep Vidal and sell rakitic

The way your the writers of the articles can help bing lies out here. Where Barcelona would take the money 💵 from to land 7 potential players? Neymar alone money 💵 caused them to fail last summer ☀️. It's just hard for me to leave Barcelona activities behind me or else I would have uninstalled this app cuz u guys can really hurt 🤕 me most of the time.

Hey, relax. These are just rumours, our only intention is to let you know what's happening in the media. Some of these stories will turn out to be true and some will be wrong.

Fans who are causing board due to these articles. Listen these are just news or rumours. They are not official. Please before blaming anyone try to think weather that person is behind this news or not. Whenever there is an official news that is where we can blame our board or appreciate our board.