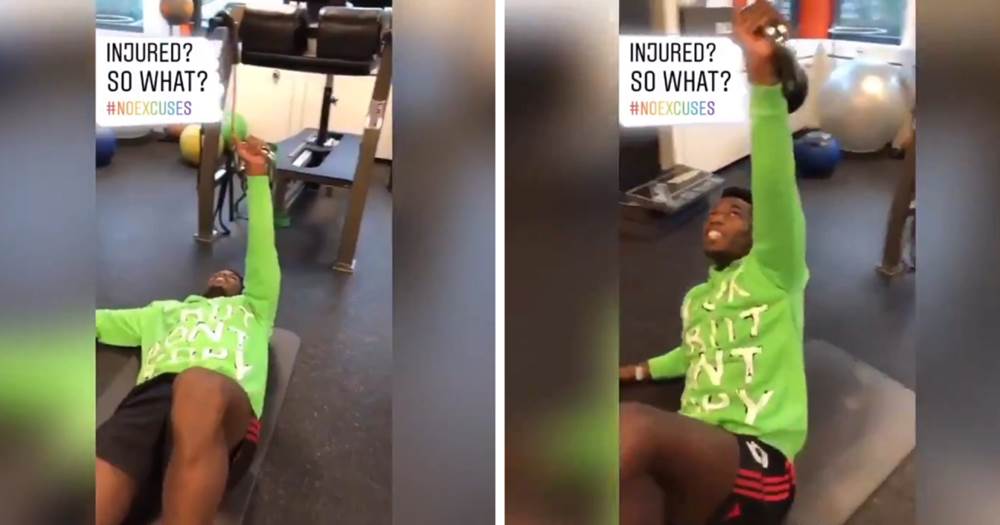 Paul Pogba remains in high spirits despite a prospect of spending another month on the sidelines with an ankle injury.

The Frenchman, who had a serious operation on Tuesday, is already back at the gym working hard as his road to recovery begins.

The Man United midfielder posted a video of himself lifting weights on Thursday, captioned: 'Injured? So what?' with a '#NoExcuses' hashtag.

Pogba is expected to be sidelined for up to four weeks after picking up yet another unfortunate ankle injury last month.

The Frenchman has been practically absent since August as injuries continue to plague United's 2019/20 campaign.

'I'm still alive, that's good news': Pogba posts update after successful ankle surgery
45
110
10 months ago
'Juan Mata told me always keep the smile': Paul Pogba posts injury update
25
29
10 months ago
Lingard, McTominay and more: Team news ahead of Norwich
21
41
10 months ago
'There's a load of baggage around him': Steve McManaman believes Pogba is going nowhere
25
14
10 months ago
'I don't know a player with that name': Real Madrid president all but rules out Paul Pogba pursuit
27
36
10 months ago
Martial's milestone, Bruno Fernandes deal and 3 more good things to expect at United this month
43
51
10 months ago
Pogba's brother refuses to rule out Paul's move to Madrid despite emergence of Fede Valverde
21
29
10 months ago
'He could be an absolute United legend': Pogba told to stay at Old Trafford amid summer exit links
24
15
10 months ago

He wasn't lieing, 'he's happy and injured', he's a positive guy, he sets challenges and he wants to win with Manchester United. Hopefully does good recovery exercises and be back for man city. ❤️

Steve Hanslip
10 months ago
•••
Reply to a comment by q4sim.

Are we talking about the same person ? ffs haha. Happy injured positive ?? Brilliant

brian Grayson
10 months ago
•••
Reply to a comment by q4sim.

Get we'll soon PP we really need you