Tribuna
/
Manchester United
/
News
/
'I wouldn't take anyone to United, they would even ruin Maradona, Pele and Maldini': UNCONFIRMED Mino Raiola quote roams the web 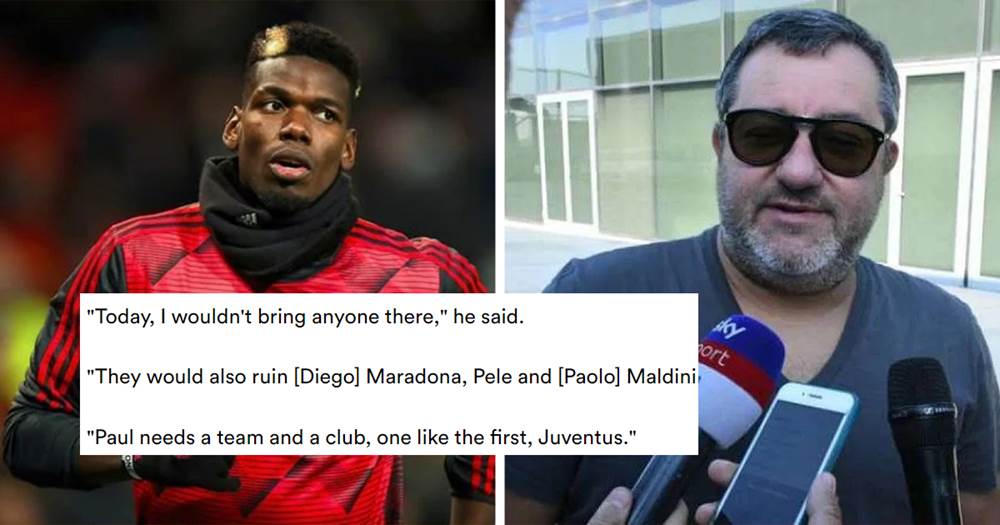 'I wouldn't take anyone to United, they would even ruin Maradona, Pele and Maldini': UNCONFIRMED Mino Raiola quote roams the web

Mino Raiola's quotes have been everywhere on the web these last two days and one's not like the other.

According to La Repubblica (and everyone else who names them as the source), Raiola wouldn't take his clients to Man United any more, not in the club's current state.

Here's what Raiola allegedly said: "Pogba's problem is Manchester United. It's a club out of touch with reality and without a sporting project.

"I wouldn't take anyone there, they would even ruin Maradona, Pele and Maldini. Paul needs a club and a squad, one like Juventus was before."

What is really fishy about those quotes is that Raiola said a completely different thing to Sky Sports.

"There is nothing against United or Ole," he told Sky on 30 December. "He [Haaland] chose Borussia Dortmund ahead of them and other clubs. If he wanted to go to Manchester United I would have been obliged to take him to United but he did not."

One more strange thing is the La Repubblica article came out on 30 December, so yesterday. Normally, anything Raiola says gets posted everywhere immediately.

On the one hand, knowing Raiola's controversial record, this stuff could be true. On the other hand, the words just make no sense and clash with any previous statements.

We'll keep you posted as regards this quote.

Manchester United
'Mino is actually class' vs 'The arrogance of the man': United fans split on Raiola's latest Pogba comments
20
50
4 months ago

Manchester United
Raiola defends his Pogba commission: 'It is very strange that they are talking about my fee'
10
11
3 months ago

Let’s be fucking fair here, we’re fans. If you’re a top European talent in today’s game, with no affiliation to our club, would you come here? His unconfirmed quote is more accurate than his confirmed. In the end of the day this prick has earned millions from our club and more than likely will again. The welfare of “his” players is not a concern to him. This is modern football.

Richie Healy, agreed with the first part. United dont have any clear plan on how they are going to be a better team. Ole has already thrown in the towel. If not for him being a legend, fans would have asked for his head. Moyes said the same. He keeps saying future and he has been at the helm for an year. When future? no one knows. He was the wrong choice to begin with and keeps proving it over and over again. Naive in european market which means he will go for British players. Dont see a good British midfielder who United can buy.

he's not wrong about United. But he's just a greedy fat bastrard in general.

Sseddu7
4 months ago
•••
Reply to a comment by Michael Chau

You are the types of.fans that need to be beaten up to death

You don't know if he said that, looks like he's being scapegoated in my opinion