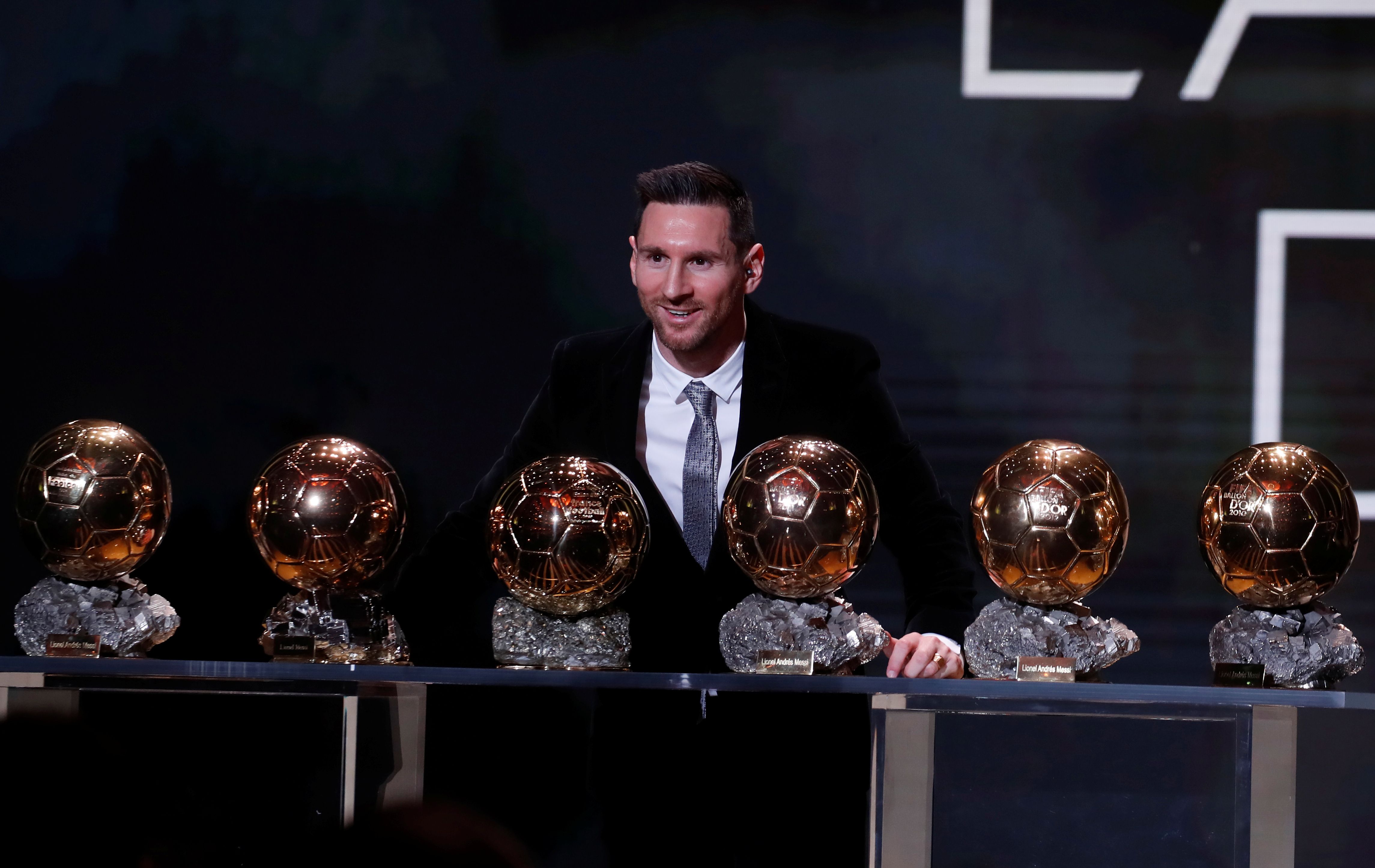 The Ballon d'Or is the most coveted individual accolade in football, but the 65th edition of the prize has a strange feel to it.

With the unprecedented Covid-19 pandemic plunging the world into chaos, football was certainly one of the worst casualties.

All the major European leagues were suspended for several months, completely upsetting the calendar, whereas the international competitions were postponed by a year.

Given the deteriorating conditions in various parts of the continent, resumption of the season was a major doubt. However, those have been allayed now as everything's slowly coming back to normal.

With the Bundesliga already done and dusted, its counterparts from Europe's top five leagues, barring the Ligue 1 which was cancelled, are fast seeing off the 2019/20 season.

This has allowed players to continue from where they left, as well as letting some renew their bid for the prestigious gong.

Even though we're still some time away from the December ceremony for the 2020 edition of the prize, here are the 11 main candidates thus far:

Pep Guardiola’s managerial credentials lay bare when you consider how he’s brought about the meteoric transformation of Raheem Sterling at Manchester City.

A promising young talent at Liverpool, the winger has developed by leaps and bounds under the tutelage of the Catalan to firmly establish himself as one of the best forwards in EPL and beyond.

Sterling has continued in the same vein this season too, netting 27 times in all competitions, including 17 in the Premier League alone.

After a whirlwind start to the campaign, he struggled with consistency, much like the team itself, but has found his feet again in the recent clashes.

Considering the stellar names on the list, the 25-year old might be an outside favourite for the Ballon d’Or, but it could all change if he’s able to guide his side to FA Cup and European success.

It speaks volumes about Mohamed Salah’s lofty standards when his tally of 23 goals and 12 assists from 45 games is still considered a ‘decline in form’.

After performing to his absolute best for two consecutive years, fatigue might have crept into his play, but that hasn’t deterred him from helping Liverpool to its maiden Premier League title.

The Egyptian ace struck many important goals which won his team some valuable points along the way, and continued to be one of the best performers in the team.

It’s a shame that such a promising season will culminate in only the league title and nothing more, but a strong finish might ensure Salah a third successive league Golden Boot.

Ligue 1’s premature end to the season due to the Covid-19 pandemic means Kylian Mbappe hasn’t been able to add to his prolific tally.

The PSG ace was having another fine campaign, netting 30 times in all competitions, including 18 in the league from just 20 games!

Had the league reconvened like its counterparts, Mbappe would’ve banged some more in. However, he still has two league cup finals and most importantly, the Champions League still to come.

This is the best chance for Thomas Tuchel’s men to finally clinch the big ol’ ears, and should that happen, Mbappe will be at the forefront, thereby strengthening his Ballon d’Or chances.

Not the most stellar name on the list, but the Slovenian’s performance for Atalanta all season has been exactly that.

In just 26 league appearances, Ilicic has scored 15 goals and assisted eight more to help Gli Orobici remain hot on the coat-tails of Juventus.

At 32, he’s becoming one of the best late bloomers in football and currently enjoying something of a second wind in his career.

The striker also propelled the Bergamo outfit to its first ever Champions League quarter finals after netting five times against Valencia in the last 16, including a four-goal salvo in the away leg.

Ilicic may not boast a star power like many other names on this list, but he’s emerged as a formidable attacking force to be reckoned with in this season.

The Bundesliga witnessed several young guns rise to the fore this season, but Jadon Sancho remains the cream of the crop.

Widely touted to be England’s next big thing, the 20-year old forward once again had a stormer and helped Dortmund mount another stern challenge at Bayern Munich for the Meisterschale.

With 17 goals and 17 assists in the league, Sancho boasts the highest goal-involvement in all of Europe’s top five leagues after only Lionel Messi and Robert Lewandowski.

His sterling performances have alerted several top shouts of the Premier League, particularly Manchester United, who’re reportedly set to table another bid at the end of the season.

After a phenomenal breakthrough campaign last year, Sancho has taken his game up by several notches this time and is already matching toe-to-toe with the game’s biggest stars.

Liverpool’s historic Premier League triumph is down to an enormous collective effort, but several players in the squad have been at the very top of their game, none more so than Van Dijk.

He missed out on the prestigious gong last year to Lionel Messi only by a whisker, but looks like he’s going to have another stab at it again this time around.

The Dutchman has continued to be immense at the back for the Reds, playing every single minute of their league as well as European campaign.

He’s revolutionizing the art of defending with his superior all-round performances as Van Dijk is already etching his name besides the all-time defending greats.

Liverpool’s failure to add anything more to the domestic title might hurt his chances a little, but his consistency and stellar showings throughout the campaign are too hard to ignore.

If you were to draw out a list of the most underrated players of modern times, Thomas Muller would indisputably rank at the top.

The World Cup-winning star has been around the block for well over a decade now and despite his prolific record of 389 goals and assists from 531 games and 23 trophies, he’s never even made it to the Ballon d’Or podium.

This season too, Robert Lewandowski garnered all the headlines for his blistering run, while it was Muller who kept the Bavarian juggernaut running.

He was the creative chieftain of the side, making several key passes and laying 21 assists in the league - a new Bundesliga record, whilst also netting eight times himself.

Despite the stellar campaign, he was outrageously overlooked in the team of the season, but winning the Champions League might just embolden his Ballon d’Or prospects.

The Skyblues may have blown hot and cold this season, struggling with consistency and poor record away from home, but De Bruyne never failed to deliver.

In fact, this is statistically his best season yet. The Belgian wizard has been top notch throughout, making 18 assists and creating 120 chances, both highest in the Premier League.

For a player who missed most of the previous season due to a serious injury, this is quite a turnaround. He’s bounced back in the most emphatic fashion.

The ex-Wolfsburg star has also struck 11 times, and remains firmly on course to break Thierry Henry’s all-time assist record for a season.

De Bruyne has effectively burnished his credentials as the best attacking midfielder in the world, and still has two more competitions - the FA Cup and the Champions League - to bolster his Ballon d’Or hopes.

Just when we thought the Messi-Ronaldo era was coming to an end after Luka Modric’s historic triumph in 2018, the Argentine snaffled the Golden Ball from his Clasico rival the very next year.

He wasn’t done yet, and he surely isn’t even now. Once again, Messi has been at the very top of his game even as Barcelona continued to go through the motions.

With 22 goals and 20 assists in the league, both of which are presently the highest in La Liga, the Blaugrana ace still very much rules the roost in the Spanish top-tier.

And just to get you up to speed, he also joined Thierry Henry as the only other player in Europe’s top five leagues ever to register 20+ goals and assists in a single season!

Even though that may not be enough to win them the title this season, his imperious form and all-round performances in the recent weeks are too hard to be given a miss.

The Bianconeris haven’t exactly been at their best this season, but the same cannot be said of Cristiano Ronaldo, who’s had an absolute stormer.

With 32 goals and counting, the Portuguese astro has continued to break records and set new milestones. Only recently, he became the first Juventus player in 59 years to score 25+ league goals!

And he isn’t merely stat padding, because Ronaldo’s astronomic numbers also include some really breathtaking strikes - the towering header against Sampdoria, the 35-yard screamer against Genoa, the sublime free-kick to Torino et al.

With the Bundesliga and DFB-Pokal cups already in the bag, Bayern Munich are now on course towards a historic second treble, and should that happen, there’s no stopping Robert Lewandowski from getting his mitts to the golden ball.

The peerless Pole was in a league of his own this season, netting left, right, and centre. His blistering run has in fact yielded 50 goals - yes, FIFTY! - already and don’t forget, there’s Champions League games still to come.

He’s the only player in the 2019/20 season to reach the milestone so far and looking at the overall standings, it's extremely likely to remain that way.

Lewandowski has been one of the most prolific stars of the last decade and yet quite inexplicably, he’s never even made it to the top three nominations.

This year though, the Bavarian ace might as well just clinch the prize.