Tribuna
/
Real Madrid
/
News
/
Incomparable: Zidane is the only manager to win 9 out of 9 finals he coached in 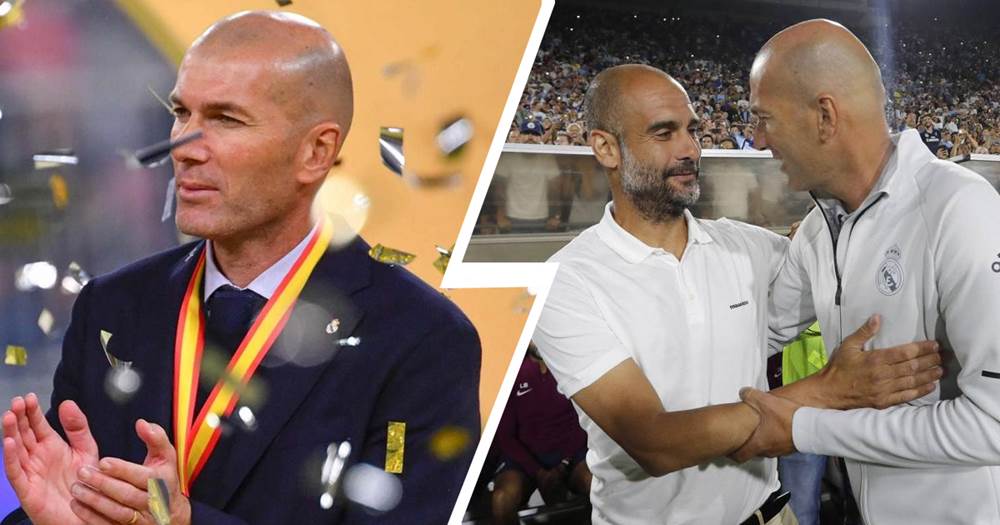 Incomparable: Zidane is the only manager to win 9 out of 9 finals he coached in

With the Supercopa triumph against Atletico, Zinedine Zidane has solidified his status as the one and only invincible manager.

According to sports data expert Alexis Martin-Tamayo, better known as MisterChip, Zidane's record of 9 out of 9 finals won as Real Madrid’s manager is unprecedented in football’s history. The closest is former Barcelona coach Pep Guardiola who won 8 of his first 9 finals.

This is how the list of Zidane's achievements looks after he led Real Madrid to the victory over Atletico Madrid on penalties in the Supercopa final:

Overall, Real Madrid boss won ten trophies with Los Blancos, with 2016/17 La Liga title adding up to aforementioned cup competitions. Unfortunately, Zidane is yet to win Copa del Rey at the helm of the club.

Moreover, it's the second time Zidane defeats Atletico in the title decider: in his very first final as Real Madrid coach in 2016, Los Blancos won 5-3 against their city rivals in the Champions League final penalty shootout.

Despite his truly incredible record with Los Blancos, the Frenchman remains humble giving all credit for the achievements to his players and staff.

"I've always given my all, but the players are to be congratulated because we won thanks to them, Zidane said in the post-final press conference.

"That's the DNA of this club and what interests me is giving my all and believing in what we do. With hard work and humility, we can achieve big things.

"There are a lot of people [staff] behind it who work very well, are competent and give their all for this shirt. [Mariano?] I'm counting on all the players I have at my disposal. Then I must choose. Mariano's situation is not going to change."

How many more trophies do you back Zidane to win with Real Madrid?

Zidane's 9th final: will his 100% record hold?
57
6
9 months ago
Florentino Perez: 'Zidane is a blessing from heaven'
91
10
9 months ago
😭 MONDAY MOAN: What can possibly stop Real Madrid from winning trophies this season?
60
32
9 months ago
Supercopa, stalwart defense & 3 more good things to have happened to Real Madrid in 2020
47
2
9 months ago
SUPER CAMPEONES: Relive Real Madrid's glorious Supercup victory over Atleti! (video)
44
3
9 months ago

EVERY REAL MADRID FAN WHO OPPOSED AND INSULTED COURTOIS AND ZIDANE SHOULD BE BRAVE TO SHOW UP AND APOLOGIZE TO THEM. I WILL START WITH MYSELF NZOUEPET FELIX WANJI FROM KUMBA CAMEROON 🇨🇲. MR. ZIDANE. FOR SOME TIME I WAS AGAINST YOU THOUGH I NEVER WANTED MOURIHNO TO REPLACE YOU. I WAS VERY HARD ON YOU. I WILL TAKE THIS OPPORTUNITY TO APPOLOGIZE TO YOU. YOU ARE A VERY GOOD COACH. YOU ARE BUILDING UP A VERY STRONG TEAM. FORGIVE ME. I WOULDN'T DO THAT AGAIN. I KEEP YOUR RESPECT. YOUR PLACE IS REAL MADRID.

SPENCER
9 months ago
•••
Reply to a comment by Nzouepet Felix

GOD bless you MR Nzouepet Felix people like you are hard get by realizing your mistakes and trying to make amendement.

Sometimes, I feel worried about the fans in this platform. So ungrateful. Imagine, calling for zizu to be replaced and real should bring Mourinho back. Zizu, thanks for your calmness which you have transmitted to the team.