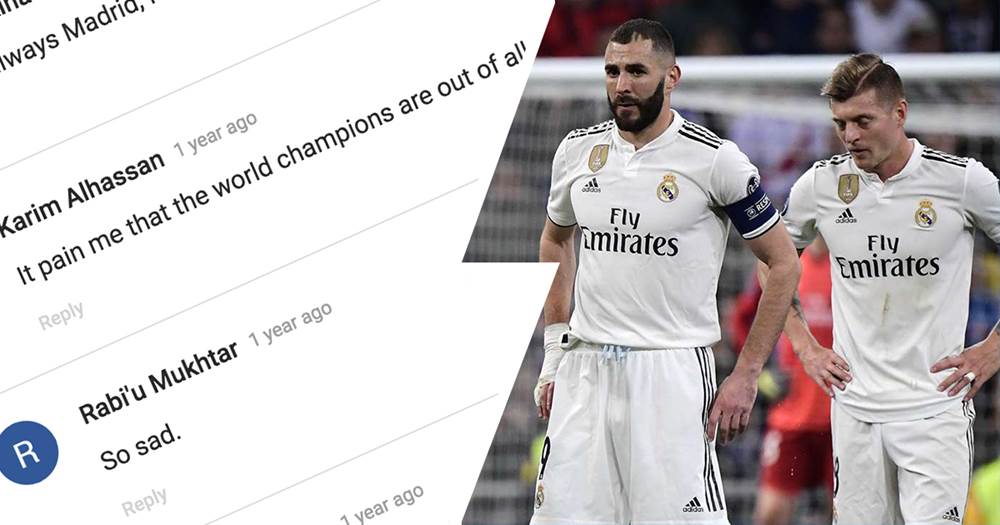 😏 '75% of the squad must be sold': what some Madrid fans said 365 days ago after CL elimination

Exactly a year ago, we were eliminated from the Champions League knockouts by Ajax. There wasn't a single person at the club who wasn't blamed by the fans on that day. Here's how Tribuna.com fans reacted to the loss back then.

💭 "Perez must be kicked out. This is absolutely unacceptable. A team that has won 3 majors in a row loses that bad! Top management's fault 100%!"

💭 "It's time for Perez to be kicked out. He is the problem of the team now. You don't sell your goal machine and buy a useless goal keeper instead of buying a prolific Striker and maintaining your outstanding goalkeeper.

"He must be kicked out he can't be running the club like his family property. We are sick and tired of him building a nice team and then destroying it with his cluelessness.. I mean how on earth would someone believe that a team like Real Madrid will be kicked out of the UCL that we’ve won for 13 times by common Ajax?"

Have your thoughts changed much since that defeat?

P.S. In order to avoid bullying, we haven't written the names of the fans who posted these comments.

Real Madrid
'Benz should support him like he did CR': fans desperate for Mariano to be Madrid's cool story
50
21
1 month ago

Real Madrid
'No vacancy', 'Get a quality striker instead!': Madrid fans laugh Pochettino rumours off
25
22
29 days ago

I recommend the immediate selling for any player above 31 years. The old players have enjoyed us an provide us with many trophies. It is time now for the youngsters to prove them selves and do the same.

No kroos no Reail Madrid

The truth about this is life itself. When things don't work well, human especially is impatient, angry and tends to say all sorts. There's nothing you can do about clubs winning and losing. It happens every season. And to the issue of old players, every big club at the moment also has big players because without these players, the youngsters direction is undefined.